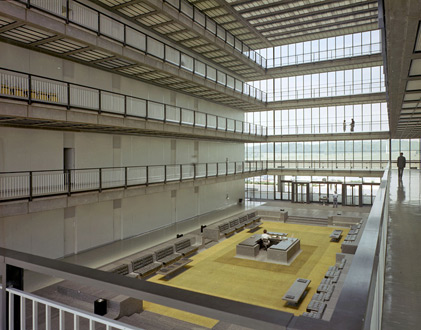 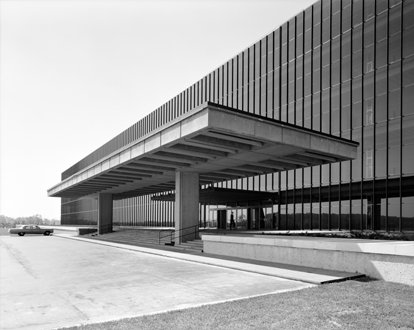 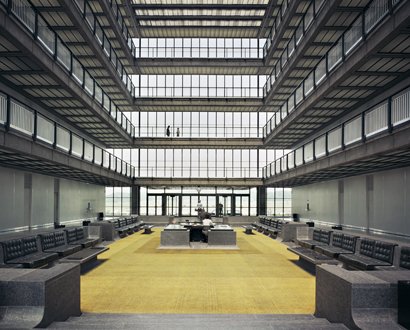 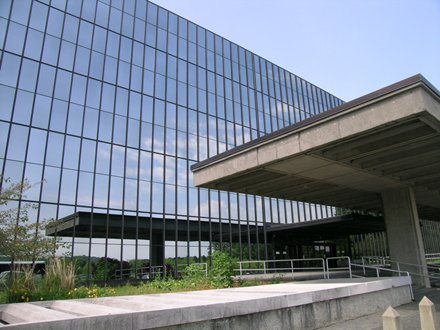 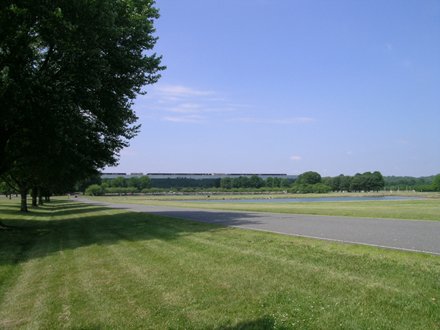 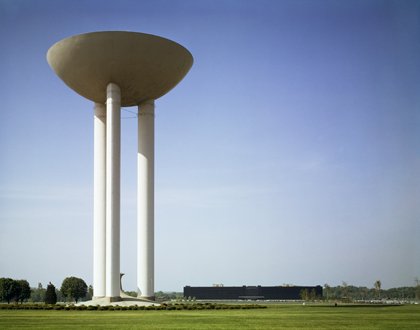 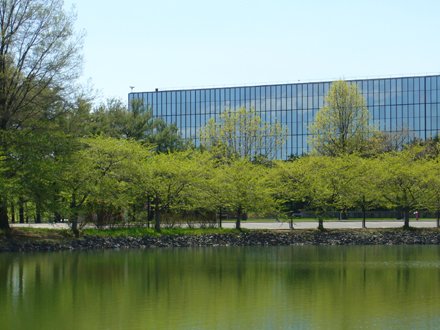 Its scale and its inventiveness as a place for the exploration of new building materials, literally and ideologically reflected the growing telecommunications industry.

Bell Telephone Laboratories designed by Eero Saarinen & Associates with Sasaki, Walker & Associates (1957-1962) was built for the research division of AT&T Corporation. It was commissioned to be an iconic symbol of the company’s innovative technology endeavors. The rectalinear, symmetrical, and refined complex came out of the American corporate campus planning movement of the late 1950s and early 1960s and was appreciated by both those who worked there and the architectural community. Its scale and its inventiveness as a place for the exploration of new building materials, literally and ideologically reflected the growing telecommunications industry.

The building’s significance lay first in its configuration of office and laboratory spaces. Flexible office layouts allowed for both closely knit areas for researcher collaboration and workspaces for increased privacy. Common spaces—, atria and extensive landscaped areas— researchers in contemplative environments. Saarinen’s openness to exploration in materials and construction methods was key to his harnessing the new capabilities of manufacturers to coat window glass with mirrored film, a decision that contributed to a new aesthetic exemplifying the precision of high technology.

The Bell Lab’s 473-acre site includes an oval pool around which an extensive network of roadways and parking lots is arranged within a larger oval ringed by a greenbelt. Individual parking spaces are angled to form a visually compelling graphic from above. The six-acre pool is used for building services, including air-conditioning and fire protection. As a landmark for the site the designers placed a 127-foot high, white painted-steel watertower in front of the pool.

The building’s first phase was 711,172 sq ft (700-ft by 135-ft) and five stories above grade. Anthony J. Lumsden served as project architect. A second phase was built in 1966 after Saarinen’s death. A design team led by Kevin Roche expanded the building from the cores toward the back to reach its current 350 foot depth and to create the interior courtyard space. In 1985, Roche and Dinkeloo expanded the building’s length with two more bays added to each end. It is raised on a five-foot above-grade concrete podium from which intake and exhaust systems for the building’s air-conditioning is housed. The below-grade level includes an auditorium, cafeteria, shops, library, computer room, services, and loading docks, as well as a huge basement facility for technical equipment and mechanical systems.

Numerous design innovations were cited by critics and architects at the time of the building’s completion. Primary in the discussion was the building’s layout and spatial arrangments comprising four units separated by the open cruciform atrium. The shorter axis middle sections serve as the entrance and reception lobby and lead to the transverse open atrium space. The atruim is capped by a skylight framed with of a herringbone-like pattern of Corten steel. Rather than the typical double loaded corridor, Bell Labs configuration offered both privacy and community. The 24-foot deep laboratories line one side of the interior corridor and 12-foot deep offices, the other. The offices are setback from the façade by 6-foot-wide corridors providing circulation between the offices and the exterior window wall. The building structure accommodated a flexible module system of interior spaces. This system allowed scientists to expand and contract their work space as needed, giving them more immediate control over it.

The mirrored glass façade is the most visually compelling element of the complex. Saarinen used it as the primary cladding material, exploiting its translucent and transparent qualities. The glass, which reflects 75 percent of the sun and transmits 25 percent daylight, was first installed only on the south facade because the fabricator could not produce enough glass at the time for the entire building. What was not mirror glazed in the first phase was a gray, heat resistant glass. Eventually the entire building was sheathed in the new glass. The 3-foot by 6-foot window units use panes of glass laminated with a plastic film and a thin layer of aluminum particles sandwiched between. The units are held in place with neoprene gaskets and separated with anodized aluminum mullions. The glass had a double function, to allow for views out but not in. Additionally the glass reflected sunlight thereby reducing heat gain. Aesthetically the designers conceived of a way for a building to become invisible, to blend with the landscape by means of reflecting it.

By 2006, AT&T Corp and its research arm Bell Labs was owned by Alcatel-Lucent, a French telecommunications company. Shortly thereafter, Alcatel-Lucent announced it was selling the building in Holmdel, NJ, and in July 2007 it vacated the two million sq ft facility. The complex was slated to be purchased by a developer— Unlimited Inc.— intended to demolish the buildings and fully redevelop the site. Opposition from local citizens, a large contingent of Bell Labs alumnus and the architecture community helped stall and eventually end this deal. In addition to its architectural significance Bell Laboratories holds an important history in the development of technology in this country. Bell Labs made such advances as the laser, solar cell batteries, the UNIX operating system and the celluar concept of mobile telephone service. In short, the site is the birth place of the cell phone.

In 2008, Somerset Development, a Lakewood, NJ real estate company contracted to buy the property as a potential mixed commercial and residential use project that would accommodate access to the site for the community. The plan proposed using the Saarinen buildings for shops, offices, a hotel and fitness center and building 398 housing units on the remainder of the site.

Local community groups and preservation organizations have joined forces to proactively guide discussions about reuse of the Bell Labs campus and to respond to new development proposals. This cooperation resulted in a three-day ideas charrette in April 2008 and a publication in December 2008.

The charrette brought together architects, landscape architects, preservationists, urban planners, historians, mechanical engineers and sustainability consultants resulting in innovative visions for adaptation and sustainable reuse of Bell Labs. Sponsored by the American Institute of Architects’ New Jersey Chapter, Preservation New Jersey, DOCOMOMO NY/Tri-State and the National Trust for Historic Preservation, the charrette convened 38 design professionals to address the problems that surround the sustainable reuse and retention of this historically significant building and the equally important landscape designed by Sasaki Associates. The concepts presented illustrated a range of solutions that predominately focused on improved performance of the building and incorporating sustainable adaptations while preserving its Modern features.

Responding to local concerns of a population influx, developer Somerset reduced its proposal to 50 large homes. It remains interested in the property as a mixed-use development of retail, commercial and residential uses and awaits zoning decisions from the township of Holmdel. The buildings sit vacant.

The buildings remain vacant and the sale to Somerset Development awaits zoning approvals from the Township of Holmdel upon which the deal depends. On May 17 2010 the WSJ reported that Somerset had fully removed the residential component of its project in a final attempt to win approvals. Details of the current proposal have not been made public, but Somerset’s proposal from 2009 shows the Saarinen complex reused as a five-story, quarter-mile-long open air atrium type pedestrian street with cafes and retail on the ground level and offices for businesses, higher education and healthcare on the floors above. The curtain walls on the short end of the building would be removed to create the open air public space within.