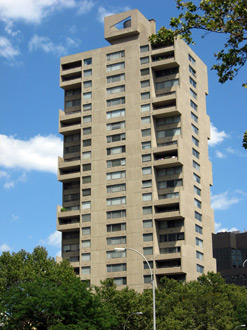 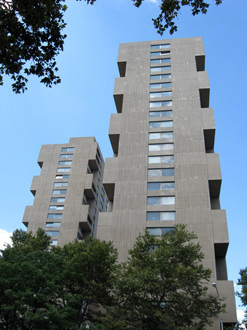 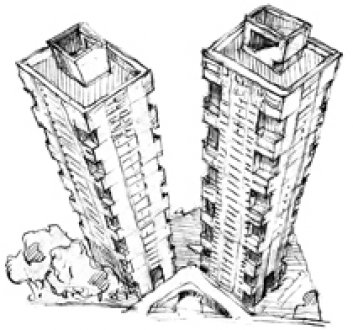 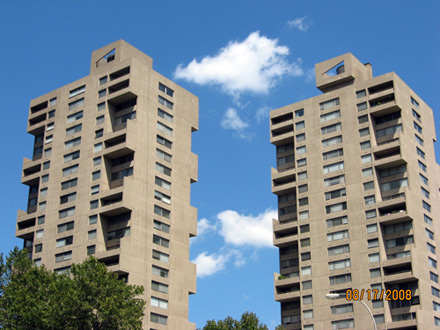 The project was among the first exposed concrete residential towers in the city, and arguably the first to emulate Corbusian beton brut.

Chatham Towers is among the high points of post-war housing design in New York City. A formally powerful and technically adventuresome project that attempted to raise the baseline for middle-class living, it is also one of the city’s foremost examples of the Brutalist mode.

Although it was developed as a private cooperative, Chatham Towers owes its existence to two major public initiatives. The first was Title 1 of the U.S. Housing Act of 1949, which encouraged city governments to purchase of swaths of property and resell them to private developers. The second was Robert Moses’ Committee on Slum Clearance, which was set up to ensure New York City took full advantage of Title 1. Between 1949 and 1960, Moses’ Committee assembled 26 development parcels including, last and smallest, an irregular triangle at the southern edge of Chinatown that would become the site for Chatham Towers (170 & 180 Park Row). As was typical of Title 1, several blocks of tenements and commercial buildings were to be razed and combined into a single superblock, fanning out from the intersection of Park Row and Worth Street and ending at the New York County Courthouse.

In a process stage-managed by Moses, the site was purchased by the Association for Middle Income Housing, an arm of housing advocate Shirley Boden’s Fund for Urban Improvement. Boden was already developing a Title 1 project immediately to the south—the snaking residential slab at Chatham Green (1959-1962)— and hired the same architects, Kelly & Gruzen, for Chatham Towers. The firm’s work at the time ranged from appealing Modern-style buildings, including Junior High School 22 (1956) and the High School of Graphic Communication Arts (1959), to characterless high-volume housing. The design for Chatham Towers, led by George Shimamoto, would turn out to be among Kelly & Gruzen’s most memorable output. In addition to Shimamoto, the design team included: Raymond Tuccio, Salvatore Calabiano, Jordan Gruzen, Richard Kaplan, Edwin Paul, Mario Romanach, Melvin Smith and Peter Samton.

A 1959 scheme established the basic configuration of two 25-story point towers. The distinctive alternation of corner balconies—two floors with, two without—was already present, although the towers were to be steel-framed and clad in a glassy curtain wall. A low commercial building was planned for the west end of the site and the remaining open area was given over to parking and landscaped areas. The tower strategy was strikingly disconnected from the design cues of Kelly & Gruzen’s own contemporaneous project across the street at Chatham Green; the architects averred their intent was to create a vertical emphasis to mark the major intersection at Chatham Square.

Chatham Towers secured approval from the City Planning Commission and the Board of Estimate in 1961. By the end of 1962, the developer had finished relocating residents and clearing the site, but construction was delayed further to accommodate planning of the adjacent Civic Center area. During this time, the western part of the site was taken for an off ramp from the Brooklyn bridge (never built), compelling the architects to eliminate the commercial building and move the surface parking into a decked garage behind the towers. Construction finally began in the second half of 1963 and was completed in November, 1965.

As built, the residential towers remained close to the 1959 design, except for one fundamental change: the steel structure was replaced with cast-in-place concrete. This was not just a substitution of one framing material for another: columns and beams were eliminated in favor of loadbearing walls and flat slab construction. Further, while the steel had been concealed under cladding, the concrete doubled as a finish surface, exposed everywhere. As justification for the increased cost, the architects noted the practical benefits for interior planning. However, the primary impact was on the architectural expression: the towers now read as monolithic solids, with the alternating corner balconies drawn into an overall sculpted form. The resulting image is impressive in its totemic abstraction, especially as the serrated profiles of the two towers address each other in the skyline.

From a distance, the exposed concrete has a sameness that gives the profiles of the towers a reductive, graphic quality. Close up, the concrete is subtly articulated according to a simple logic: walls that run unbroken from top to bottom are cast with a syncopated pattern of reveals, while all other surfaces are dead flat. Tie-holes and other signs of construction are suppressed in deference to the overall form. Chatham Towers’ abstraction is further supported by broad, mullionless windows, often grouped to form horizontal slots. Each tower is topped by a concrete water tower enclosure with a rakish trapezoidal cut-out.

The two towers contain 240 apartments, five per floor, on small floorplates that give all units but studios corner aspects. Interior planning is straightforward, with combined living/dining areas, cellular bedrooms, and bathrooms and kitchens clustered around the central elevator and stair core.

Kelly & Gruzen’s apparent intent to realize a “towers in the park” scheme was complicated by the small (1.6 acre) site. The buildings are pushed up against Worth Street, and although they meet it obliquely, the street line is held by a tight elbow-shaped entrance drive. The compression of the site also gives the base of the building a complex relation to the ground plane: the entrance drive lifts up and over a ramp to semi-submerged parking for 125 cars behind the towers. This garage is decked over with a courtyard designed by M. Paul Friedberg as both an amenity for the residents and a graphic to be seen from above, with patterned paving, tree grids, and reflecting pools. Shed roofed concrete forms serve as skylights and exhaust stacks for the parking below.

Many of Chatham Towers’ technical aspects were groundbreaking, at least for New York. The project was among the first exposed concrete residential towers in the city, and arguably the first to emulate Corbusian beton brut. While I.M.Pei had already experimented with highly refined cast-in-place at Kips Bay Plaza (1957-1963), Kelly & Gruzen introduced a much blunter approach, with broad planes and rough surface treatments. This concrete exterior was insulated by a layer of closed-cell urethane, a first in New York following a recent change in the building codes. The expansive windows were manufactured to a Swedish design that sandwiched Venetian blinds between double glazing. Chatham Towers’ most prescient feature was the use of gypsum wallboard for all interior partitions, the first time this was done in a Manhattan high rise. The Plasterers’ Union, understandably opposed to such developments, retaliated with newspaper ads urging builders to “Keep New York Plastered.”

The strength of Chatham Towers’ design was widely recognized at the time. The project received citations from both the state and city AIA chapters and a Bard Award. Over the past 45 years, the project’s immediate formal appeal and, moreover, its status as a desirable upper middle class residence have insulated it from the popular stigma attached to Brutalist architecture. The buildings have been well-maintained, and the exteriors have recently been treated with a mineral silicate coating that disguises necessary patching while retaining the surface color variation of exposed concrete. Otherwise, Chatham Towers remains very much in its original condition, down to nameplate graphics and exterior lighting.