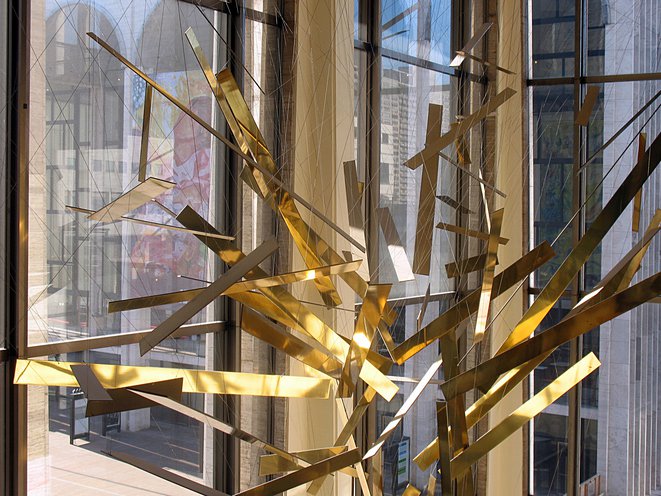 A new home for Lippold’s “Orpheus and Apollo” sculpture

Seven years ago Richard Lippold’s “Orpheus and Apollo” was removed from Lincoln Center’s David Geffen Hall (previously Philharmonic Hall and Avery Fisher Hall), with no plans for its future. A promising new home has been found: LaGuardia Airport’s Central Hall at Terminal B. Set to open in 2022, the new glass-enclosed public space, part of LaGuardia’s $8 billion overhaul, will house the 5-ton, 190-foot-long, 39-foot high sculpture bringing its shimmery majesty to travelers and passersby. Speculation is that it will be visible from Grand Central Parkway, day and night.

In December 2019, the renovation team for Philharmonic Hall, now David Geffen Hall, confirmed that it would not be returning the suspended sculpture in its redesign. Shortly after, the Preservation League of New York placed “Orpheus and Apollo”on its “Seven To Save” list. Loss of the Lippold is still a devastating blow to Max Abramovitz’s Philharmonic Hall and Lincoln Center’s main plaza, but at least the Lippold may have a chance to reign again. Read previous posts here.

“After Uproar Over Removal, Iconic Lincoln Center Sculpture Will Be Moved To LaGuardia Airport,” Gothamist, April 7, 2021.